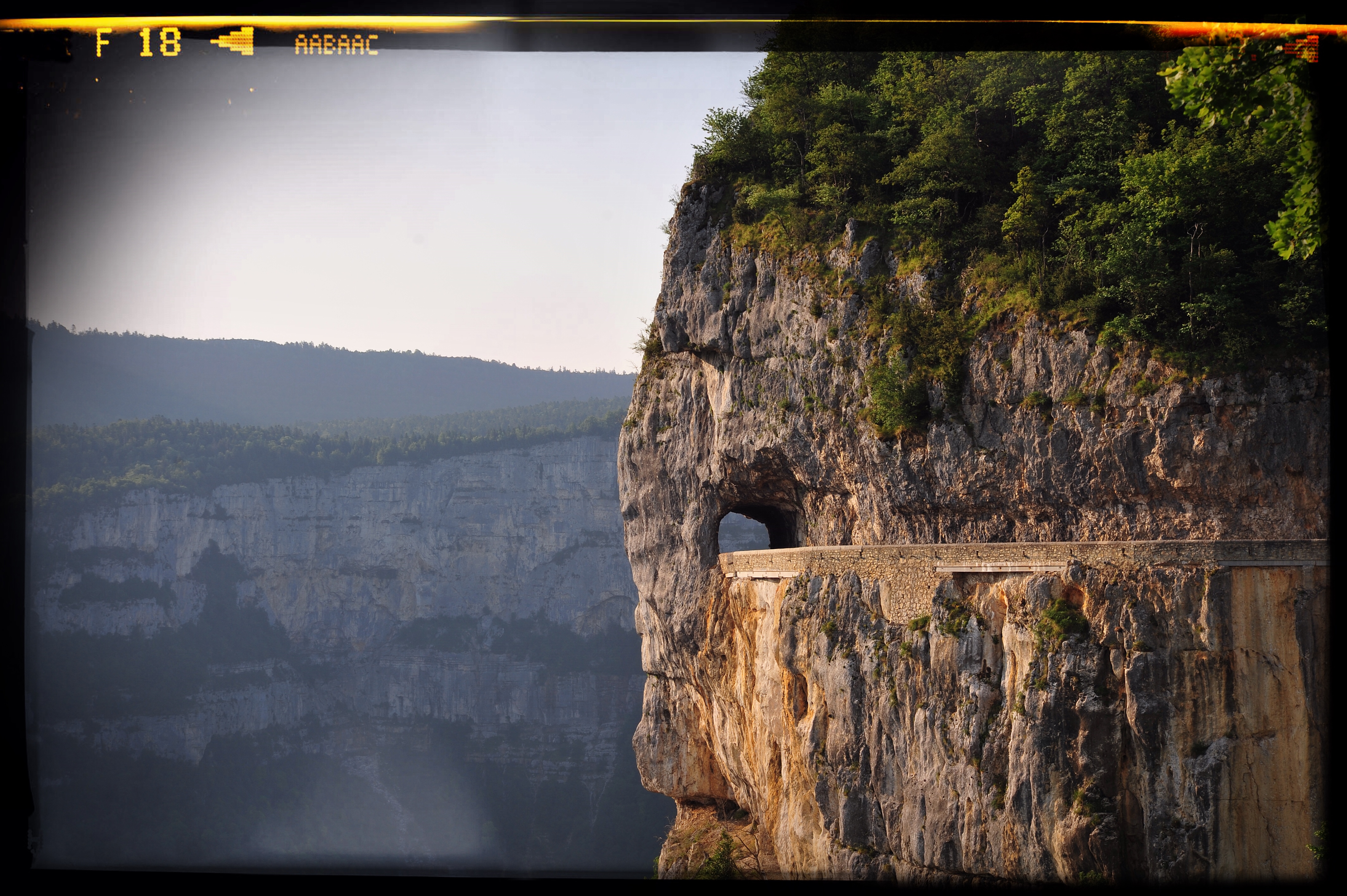 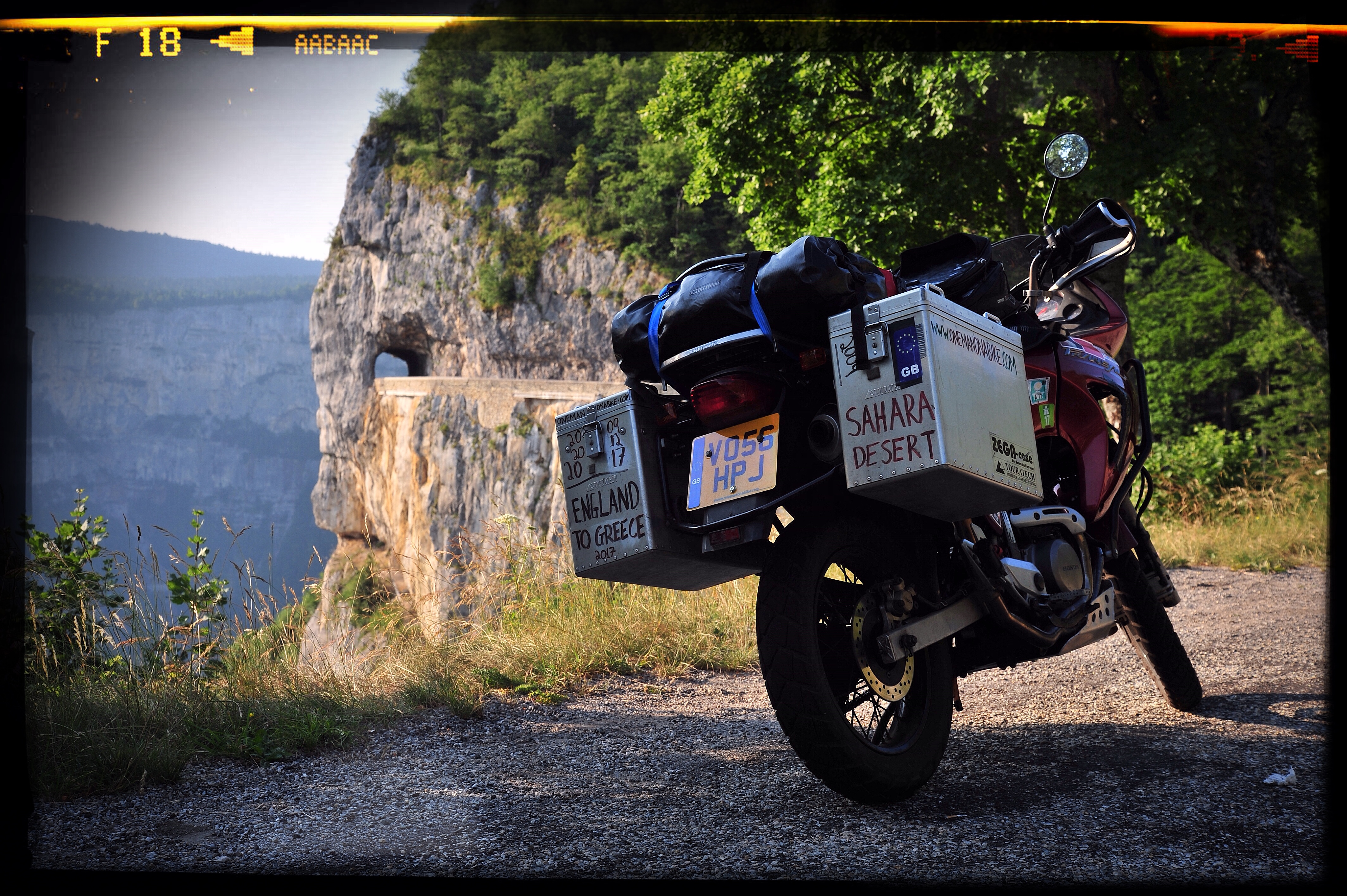 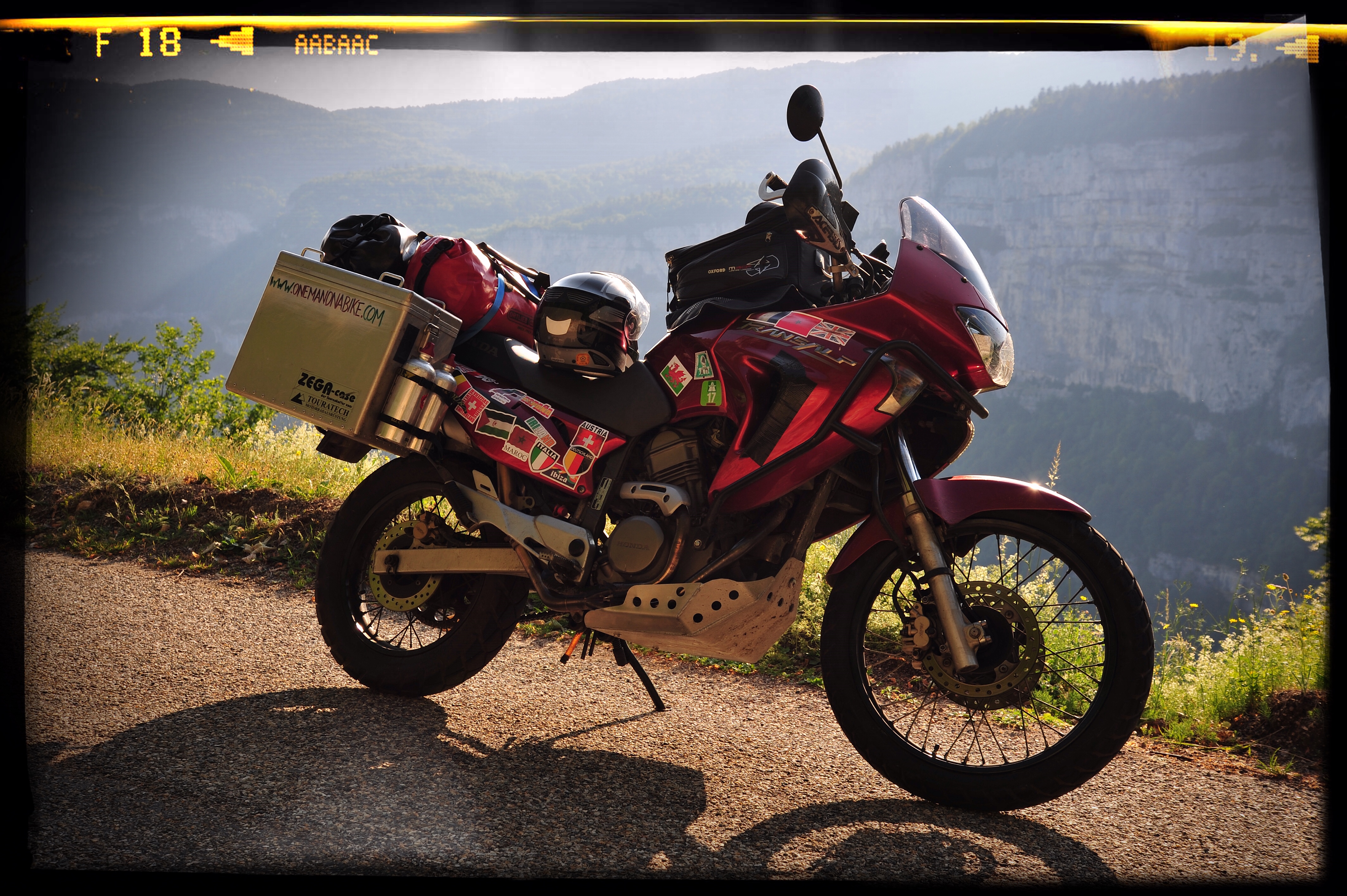 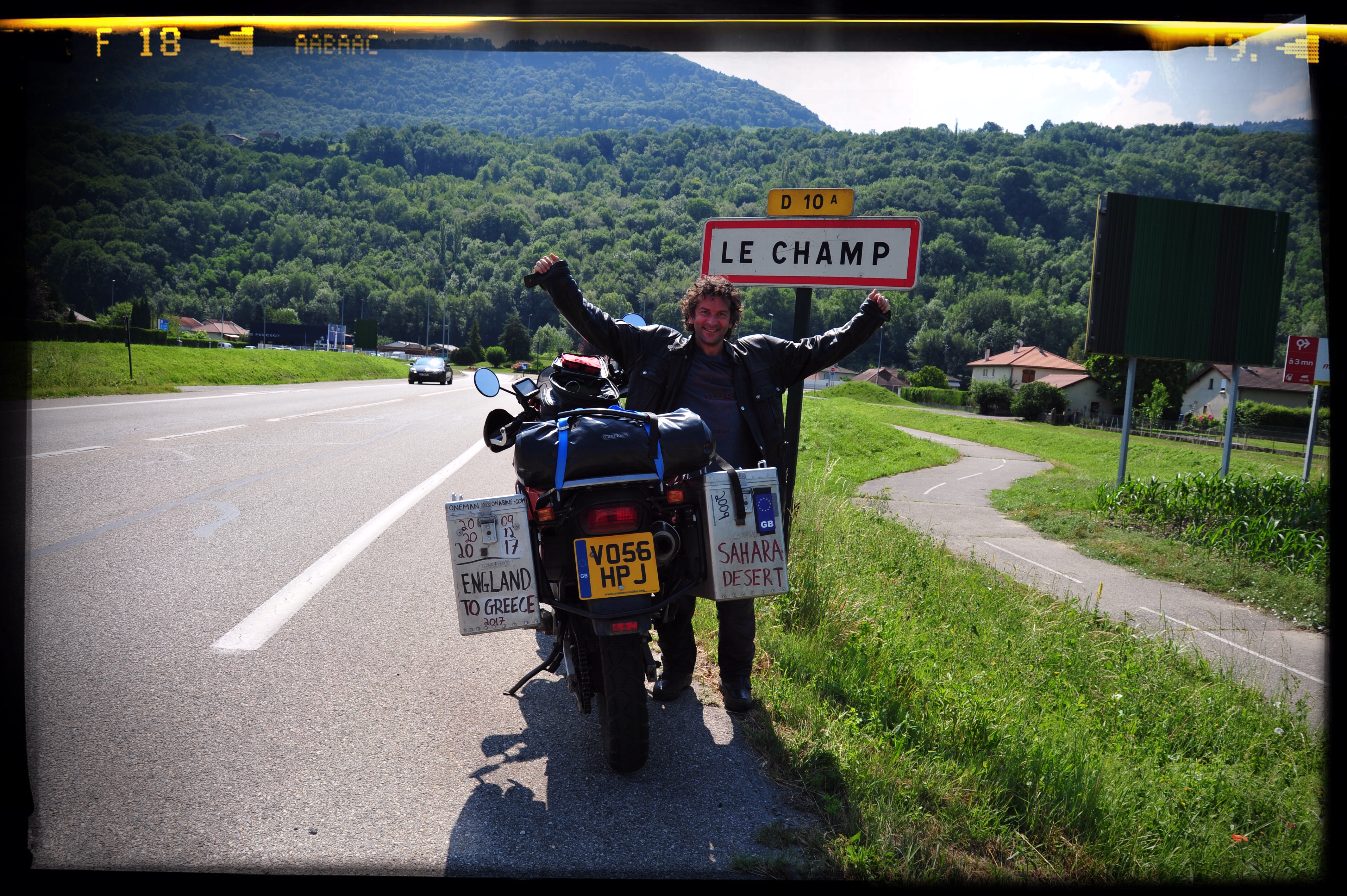 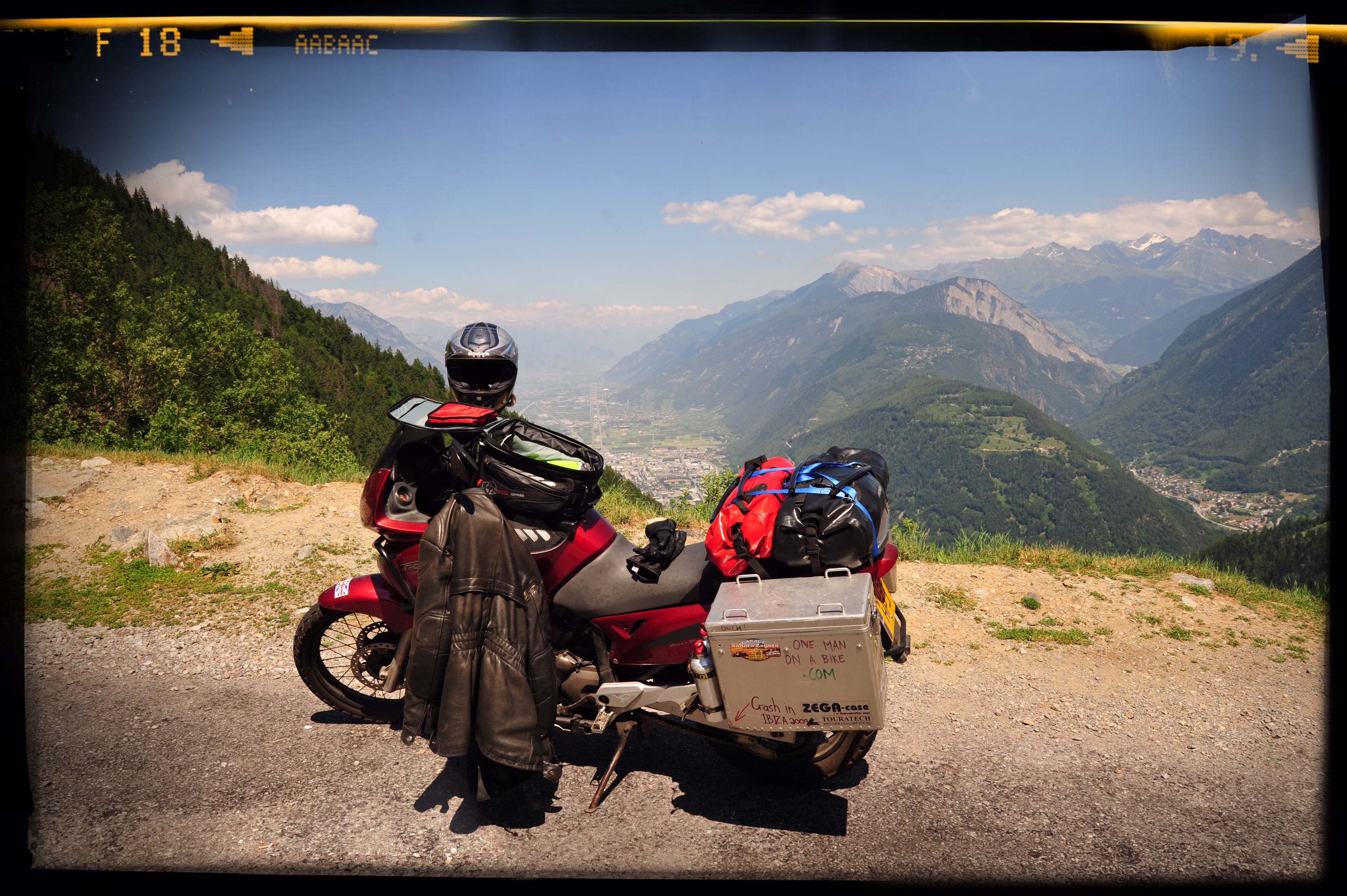 I woke up just before six in the morning after a wonderful nights sleep. Another beautiful day presented itself as I popped my head out of my tent; the sky was blue and the sun was just about to appear out from the mountain it was hiding behind. As I sat and having my morning coffees I looked over at the bike. Unfortunately, when I had arrived the previous evening, I was issued with a spot which was quite awkward to get to. It was up high and to get there I had to take a route through someone else’s pitch, squeeze past their tent and then squeeze between a car and a tree. That was fine when I arrived as everyone was awake; however, riding my quite noisy bike through that lot at six-thirty in the morning didn’t seem like a nice thing to do. As such I was weighing up the pros and cons of just riding down the high and bloody steep hill/drop. I clambered down to the bottom and took a look, bloody hell. I just about managed to climb back up to my pitch and took another look, it didn’t look any better. I sighed when I realised that I was going to ride down it anyway. I know what I’m like and sometimes just can’t stop myself.

It didn’t take long to pack up the bike, I jumped on, started it up and rode it towards the top of the hill, Christ almighty! I went flying down the hill like my arse was on fire, by the time I’d reached the bottom I had built up quite a rate of knots and was heading right for the reception. I just about managed to stop as the lady came out looking shocked.

“I’ve never seen that before!” She said. It’s always good to have something witty to say in such situations but my brain was still recovering from my rather rapid descent. Instead I smiled and thanked her for her hospitality. She bid me fair well with a Bon voyage and I was off.

As I rode to Saint-Jean-en-Royans to pick up the D76 I was completely spoiled by the sheer beauty of the area. The sun was making its first showing from behind the mountain, the smells were of mint and lavender (with the odd spell of concentrated cow shit for good measure) and the temperature was perfect. When I reached Saint-Jean-en-Royans I checked the map and found the D76. I’d been looking forward to riding this road since getting my bike license nine years ago.

The road climbed, double backed and climbed some more. The smell of pine combined with the cool air felt like mountain adventure. The anticipation of whatever was going to come next was strong and wonderful. When I reached the part that I’d seen a million times in photographs I found that it wasn’t that high at all, it was reasonably impressive but I’d bigged it up in my head so much that I couldn’t help but feel disappointed. I took some photographs anyway and continued with my ride.

Once I reached the end of the D76 I set the GPS (and checked the map!) for Chamonix and got going. One of the towns I rode through was called “Le Champ” and, as a person with a dubious sense of humour, I decided to stop at the sign, ignore all the cars and Lorries driving past and set up my camera and tripod. Two car beeped and waived and I received a wolf-whistle from a lorry driver, I like to think it was it was Kylie Minogue in her truck but I didn’t dare look up. With photograph taken I continued on towards Chamonix.

It wasn’t long before I ended up in the most horrific traffic ever. Everything was stopped and the heat was pressing down. The temperature readouts from the signs outside the pharmacies read 37 degrees and on top of that my bike was very hot and the fan was blowing the hot air onto my legs. I didn’t remember seeing a large town on the map so checked the GPS and found I’d accidentally rode into Grenoble. Interestingly, the Grenobleians (is that a word?) seem like a patient bunch, even though the traffic was terrible, I didn’t hear a single hooter and everyone simply waited patiently.

After being stuck in traffic for around 90 minutes I decided I needed a break so pulled over at the side of the road for a coffee. Shock horror I was empty! Luckily there was a McDonald’s just up the road so I popped in for seven large, strong, black coffees. The last time I’d done this I’d tried speaking French and completely buggered it up so this time I decided instead of speaking French badly, I’d speak in perfect English and be proud. When I reached the front of the queue I said

“Good morning gentlemen. I’d like seven cups of your finest coffee please, strong and black if you don’t mind.” I’m not sure what I expected but I certainly didn’t expect the response

“That’s no problem sir, we’ll have them ready for you in two shakes of a lambs tail.” It turned out the chap who was serving me was English, he had studied politics at Birmingham and was having a few months out before getting a job. What luck. I filled my thermos and continued.

Upon reaching Chamonix I followed some signs to Mont Blanc but there were lots of huge mountains there so didn’t really know which one to look at. I asked three people but each one gave me a different answer so I might have seen Mont Blanc, but there again, I might not have done. Who knows.

From there I made my way to Argentiere, Vallorcine, through the border which wasn’t there and into Switzerland. The only discernible difference I found when entering Switzerland was the speed limits. I continued on through Sion and Visp, then I spotted a sign for Furka. Being a person with a dubious sense of humour ( ! ) I found it worryingly funny saying “You Furka” every time I saw the sign.

Anyway, I’m now sitting in my tent in a camp site just outside Furka (You Furka!) I’ve had a lovely shower and am now going to drink about five coffees. Lovely. Oh wait, I almost forgot. My shower was indeed lovely but unfortunately it was in two parts. The first part involved me getting into the shower, putting half a franc into the machine and getting wet, I lathered up all the bits that needed lathering up, then the shower stopped. I didn’t have another half a franc so was royally buggered, so to speak. I had a little camping towel so did my level best to hide my dignity and made my way to the reception for another coin. The walk was only about two hundred yards but it felt far longer. When I reached reception the chap gave me a coin and a smile and wished me good luck in getting back to the shower unscathed. I made it past the tent with a laughing children, past the tent with the gossiping ladies and past the tent with the smiling teenagers, back to the safety of the shower. Phew!

Well, that’s my story for today. Tomorrow I will be riding through the rest of Switzerland, seeing some mountains and trying not to get into any trouble.