One Man on a Bike – A Greek Oddity 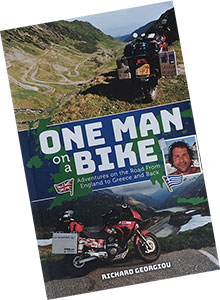 This book is a record of Richard’s month long, solo trip from England to Greece and back on his motorbike. With his incredible propensity for disaster, he bumbles through Europe in his own special style attempting to absorb his surroundings whilst keeping his inner Mr Angry at bay. Sometimes he succeeds, sometimes he doesn’t.

You’ll accompany Richard through his six-thousand mile, little boys adventure. You’ll either laugh with him or at him, but by the end of the book you’ll understand a little more about what it’s like to be someone who struggles to reach the dizzy heights of average.

This book has now been released and is available to order from the publisher by clicking here. It’s usually next day delivery.