Today I had a decision to make. My plan was to ride from England to Greece and, well, I’ve done it. My wife and mates aren’t meeting me here until Friday so the question is, what the bloody hell do I do for a week? There were all sorts of answers spinning around in my mind but with the temperature being so incredibly hot I decided to find a nice base in the Pelion to explore from. The next few days are going to be hot so I’ll explore on foot. After that, once it cools down a bit, I can get back out there on the bike. In the mean time it won’t do any harm to be completely pampered whilst based in a wonderful little mountain village in a beautiful, old stone hotel. So, within a few minutes of making that really hard decision I found myself on booking.com staring at images of ‘The Traditional Mansion – Evilion’ situated in the most incredibly beautiful mountain village of Makrinitsa. For the bargain price of just less than two hundred and seventy Euros I secured it for seven days.

So, with my decision made and my accommodation booked I made my way down stairs for breakfast. I was met by the ever happy Dimitris who served me up a special breakfast for my last day which included amongst much else, none other than my favourite, the humble boiled egg. Dimitris joined me for a while and we chatted about our respective lives for a while. I needed to get underway before the sun really started pumping out its rays so thanked Dimitris for a super stay and started packing up. With everything packed and the bike all ready to go it was time for a little photo session. With photos taken, and hands shaken, my stay at the Paradies ended. What a thoroughly great place. Thanks Dimitris!

The ride to Makrinitsa where my hotel was was only about eighty kilometres so I assumed it was going to be an easy ride. Surprise, surprise it turned out that that was not the case. I set off at about nine and everything was going well until about thirty-five kilometres from my destination. My GPS told me to take a turn and who was I to argue? I took the turn, then another, then the road simply disappeared. I bounced along hoping that something good would happen but needless to say it didn’t. Man handling a heavy bike on steep and broken ground is difficult at the best of times but in the intense heat it took every ounce of energy I had. I rode back up the hill and onto the road but my bloody stupid GPS just told me to ‘take a u-turn when ready’. I try hard to be a gentleman but sometimes I’m pushed over my line.

After a string of bad language that would have done Billy Connelly proud I thought it a good idea to check the settings. It turned out that I’d left it on ‘shortest route’ instead of ‘fastest route’, I also had ‘use unpaved roads’ ticked. These were duly rectified and we set off once more. This time on real roads with Tarmac, white lines and everything. The GPS counted down the kilometres to Makrinitsa and everything was going according to plan when I was asked to take a right turn. Having faith in my GPS because of its corrected setting I followed the instruction. The new road I was on was smaller and bumpier than the old one and zigzagged its way up the side of the mountain. I’ve been on many a mountain road in many different countries so wasn’t too concerned about this.

As the bike and I ascended the road got smaller and steeper, and the hair pin bends got so tight that going round them was like performing a tiny u-turn. Then it really got steep. More than once I had to stop and allow the bike to roll backwards for a bit just to get round. Even in the monstrous heat, and with the bike fully loaded, it was fantastic fun.

As I got closer to the village I started getting worried as I could see no trace of life anywhere. The hotel is not close to a beach but is right in the heart of a village so if the village was not up to much then I’d be in for a miserable stay. I got closer, and closer, and closer, and still there was no life. This was not good. Then, as I neared my destination, the road name changed to Agios Georgiou and everything simply came alive. The views were to die for, the streets turned to cobbles, the old stone houses and shops had beautiful flowers outside and, most importantly, there looked to be a super selection of fine restaurants from your basic chicken souvlaki all the way to fine cuisine. I bounced over the cobbles feeling the happiness that emanated from the people milling around. This was not only better than I’d expected, it was better than I’d hoped!

The details on booking.com did say that there was free parking close by so I was not expecting to park right next to the hotel. I rode as far as I could and when I could go no further parked up with a load of other bikes. I unpacked the bike and secured what was left and continued in the same direction on foot. I had no idea where I was going but that didn’t matter for once as a chap who was sitting drinking some coffee with friends looked up and said “You must be Richard.” Indeed I was. I followed him through some devastatingly beautiful cobbled streets, passed some restaurants to the hotel.

Wow, not only was the village beautiful, the hotel was perfect too. With thick stone walls, heavy solid wood doors and beautiful flooring the place fitted perfectly into the feel of the village. This was definitely for me. I was taken to my room and introduced. Obviously lugging all my luggage through a bustling village dressed in heavy black leather took its toll and by the time I’d reached my room I was about ready to collapse. I took a quick photograph of my horrible sweaty self then jumped into a wonderfully cold shower, where I stayed for a wonderfully long time.

After a small nap to energise my poor suffering body I decided to take to the streets. With leathers replaced by shorts, t-shirt and flip-flops the slow walk around the village felt wonderful. I made my way through the main centre and continued until I’d reach its end. When I attempted to take a photograph my camera refused to fire. This was all I needed. I’d finally got my camera gear exactly as I wanted it; the Nikon D700 body and excellent Nikon wide angle zoom are a perfect combination, very tough and reliable, and take excellent quality photographs, so I was not expecting this. Upon further examination I found that the button that removes the lens had been pressed in so a small turn of the lens fixed everything. Phew!

On the way back I decided to stop and have some food. A nice chicken souvlaki accompanied by a bottle of ice cold water and a double Greek coffee (with no sugar) was my order for the day. After finishing my food I walked around some more. There were three huge, and I do mean huge, trees in the main square called Bladanos trees. The largest one is thought to be over a thousand years old and is supposed to be the second oldest tree in Greece. Standing next to it that doesn’t surprise me at all. There is an old Greek Orthodox church in the village, I popped in and thought about my Granddad George for a while.

So, tonight will be about having another shower, getting down to the bar and trying out some of the local beverages. Hic! 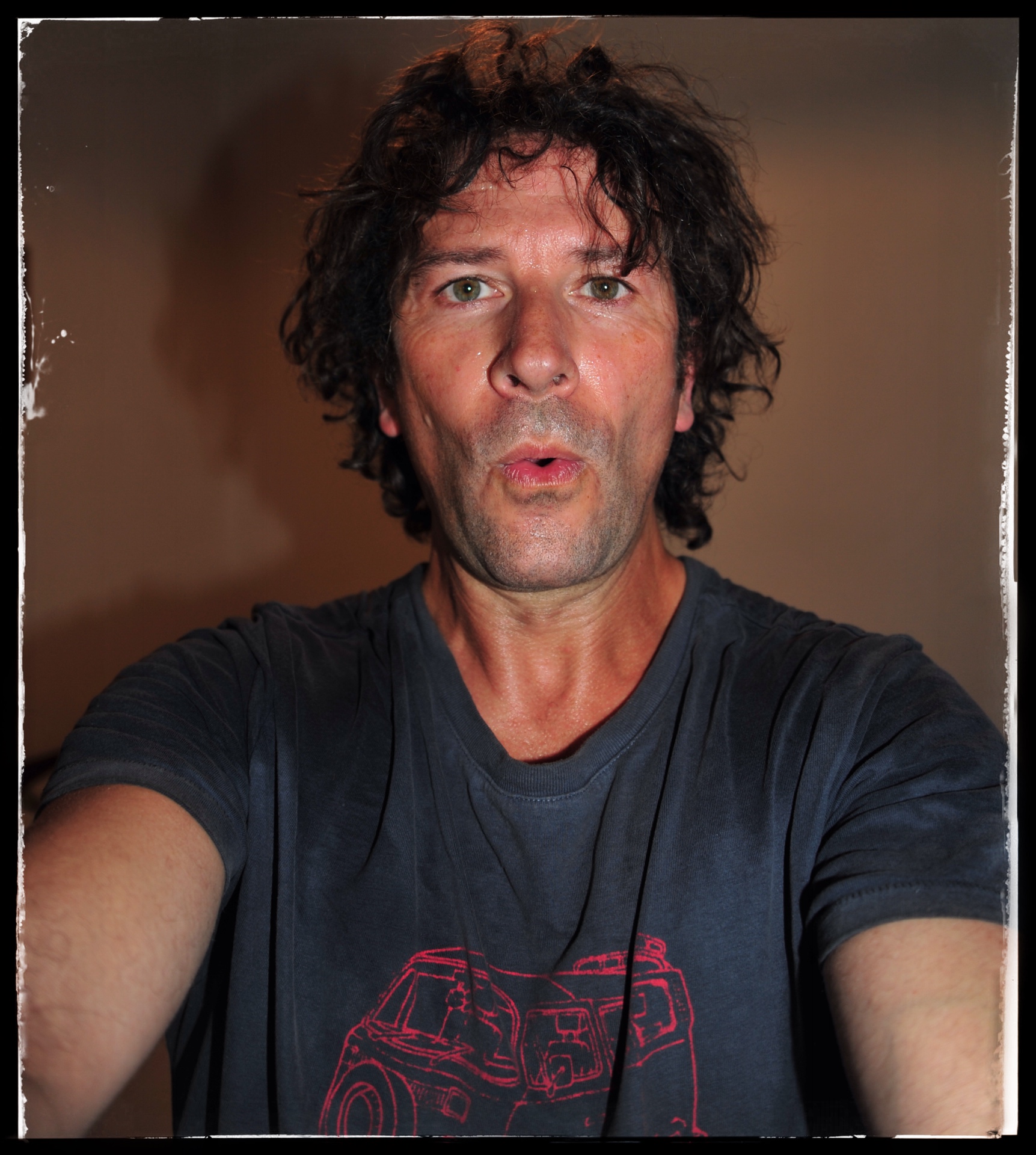 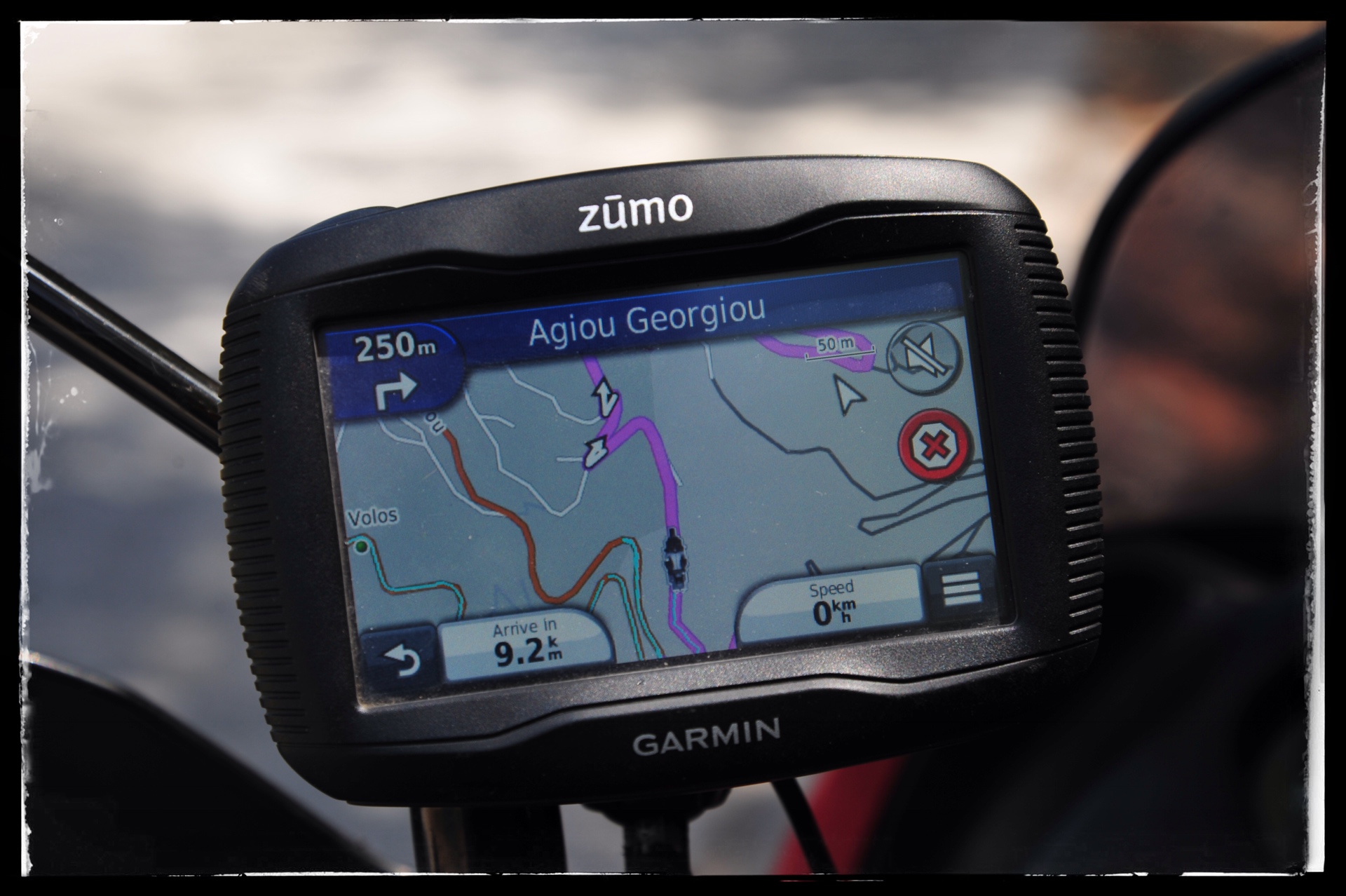 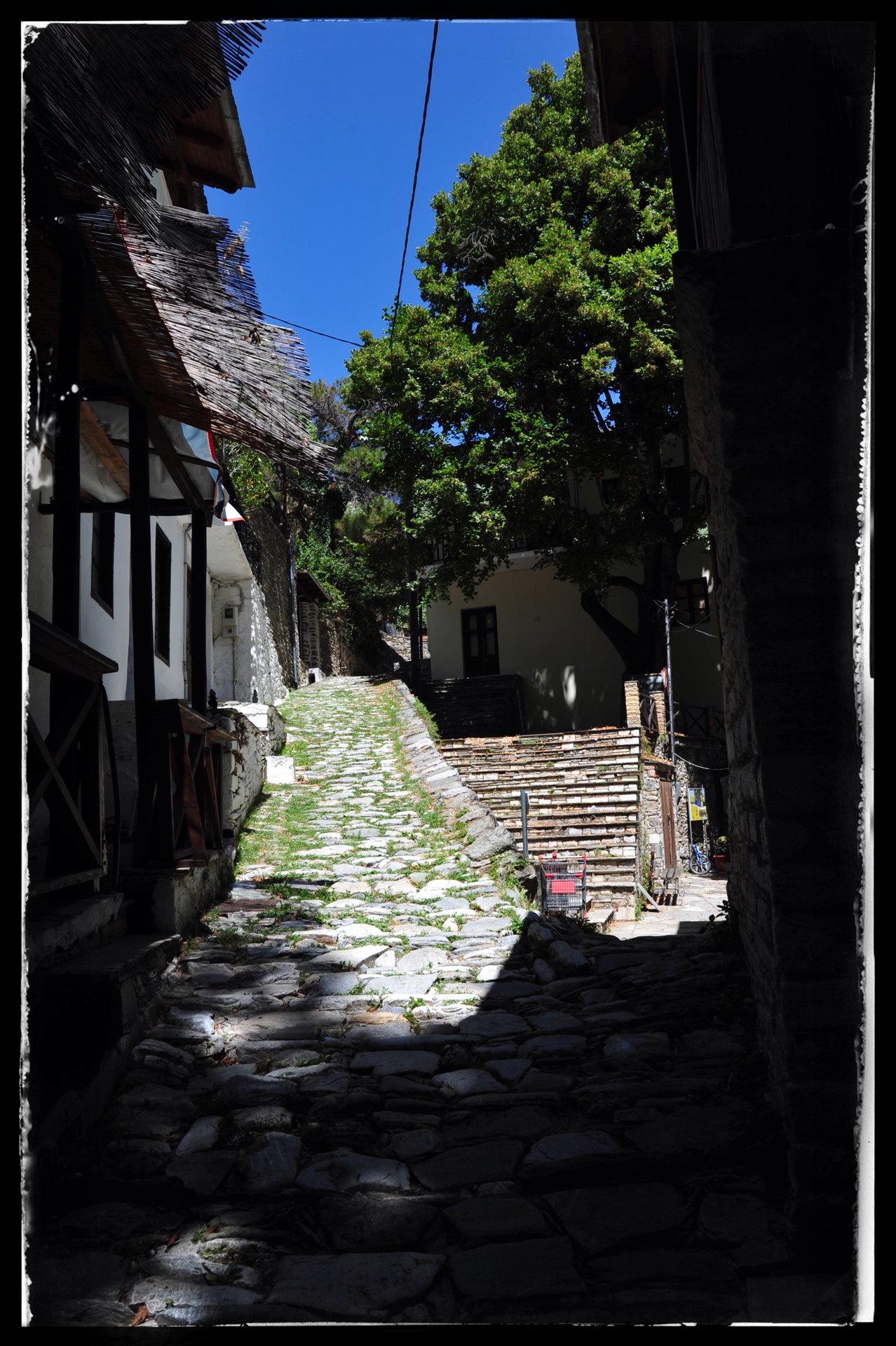 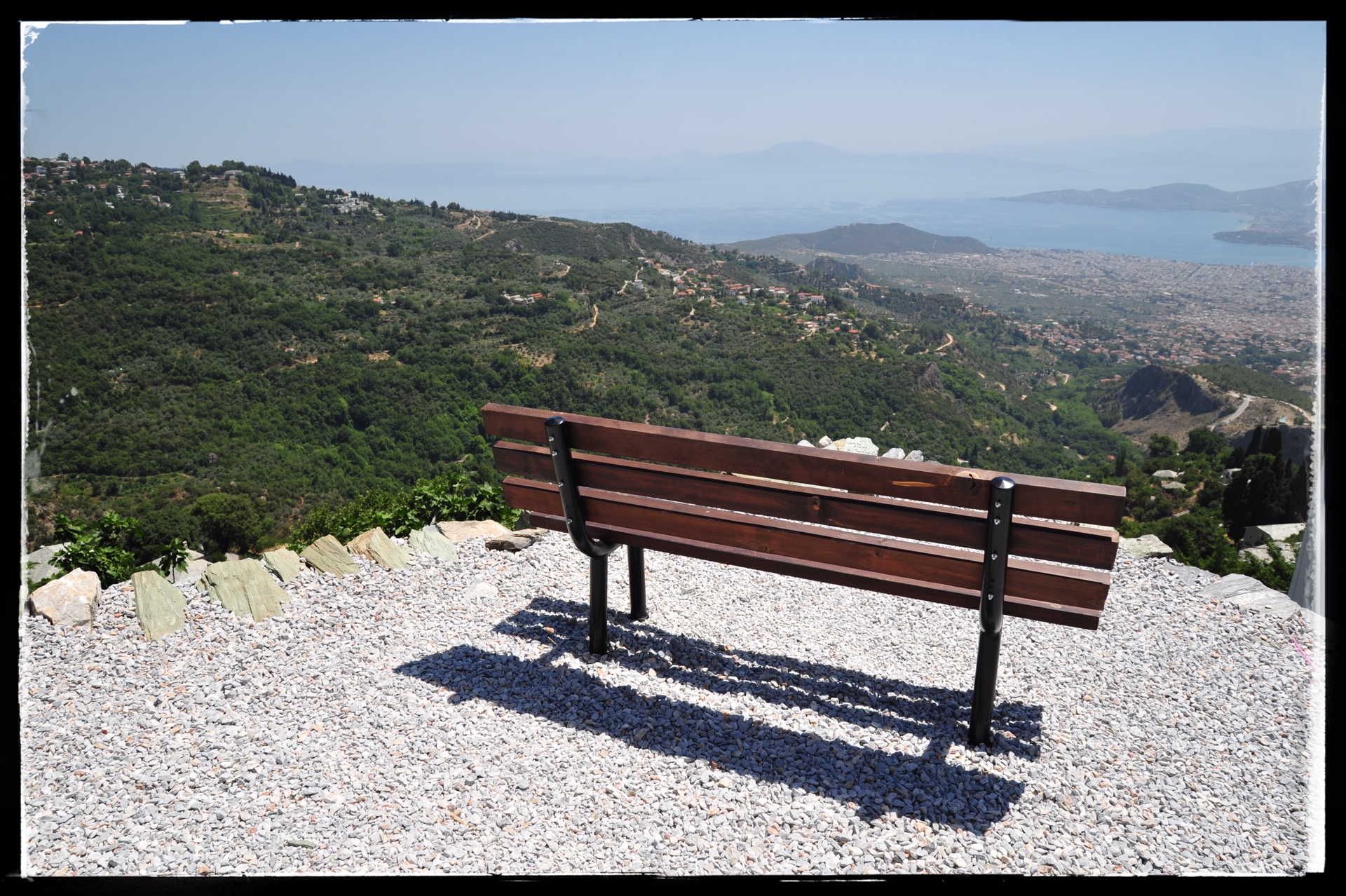 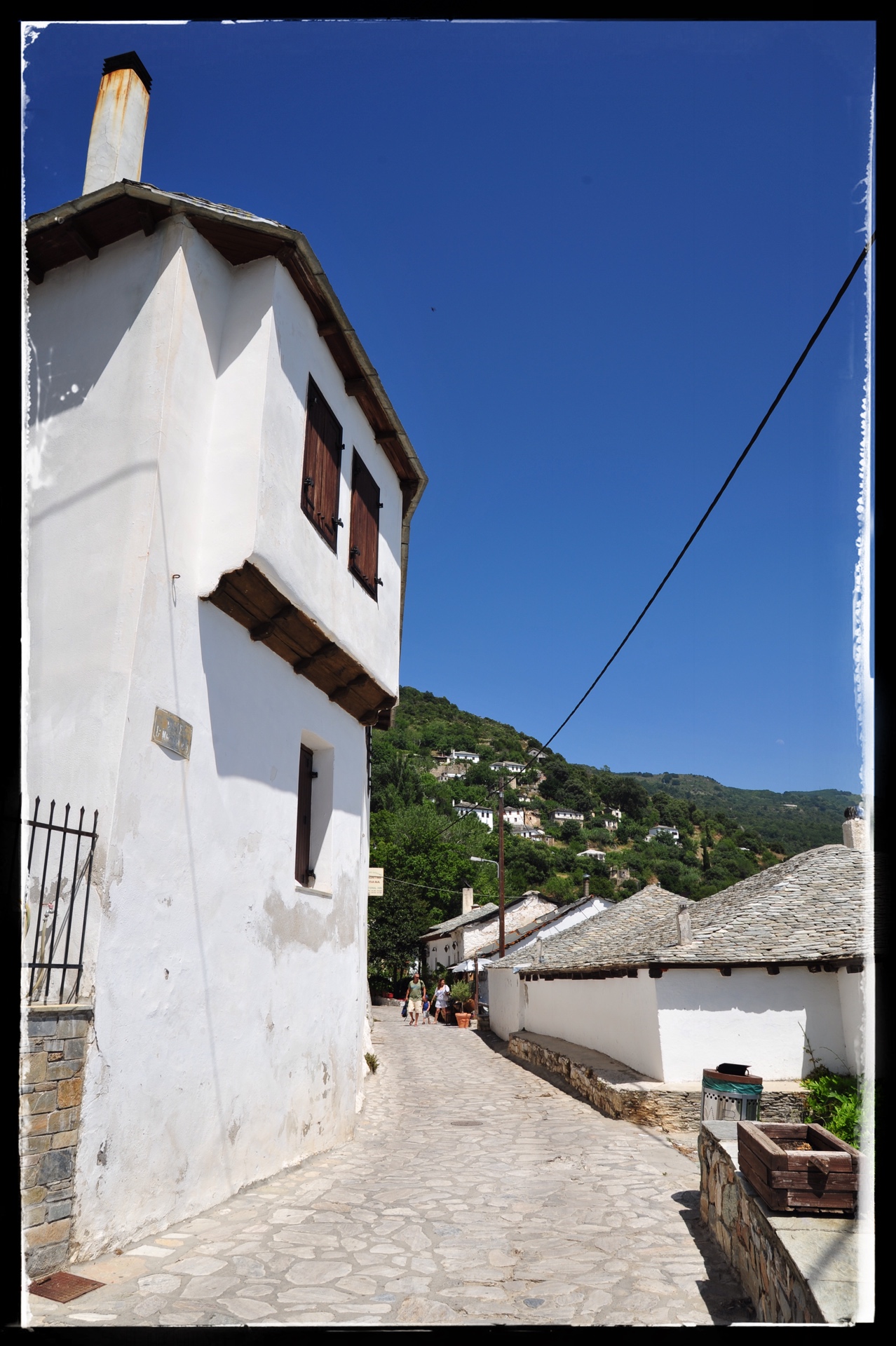 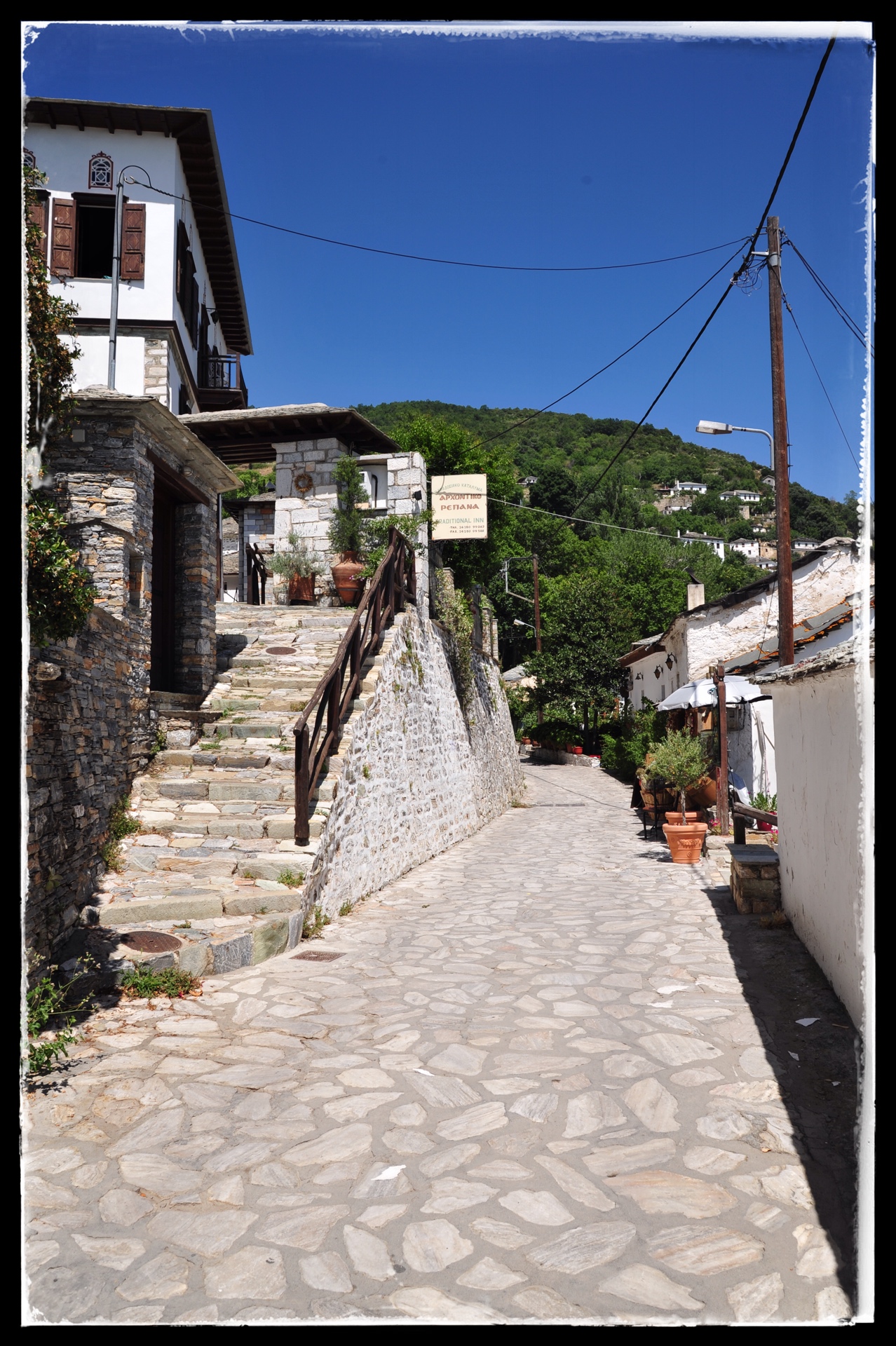 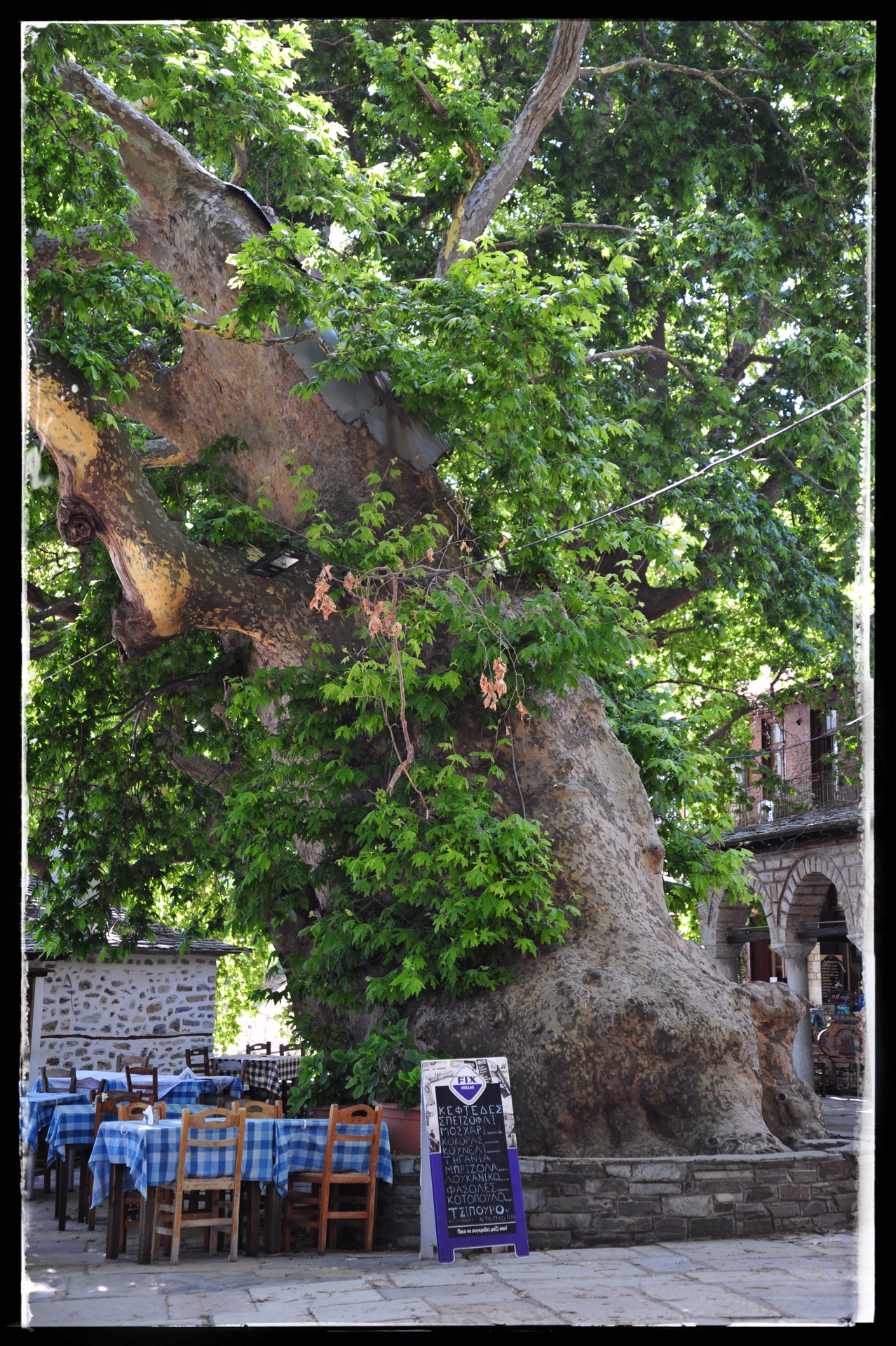 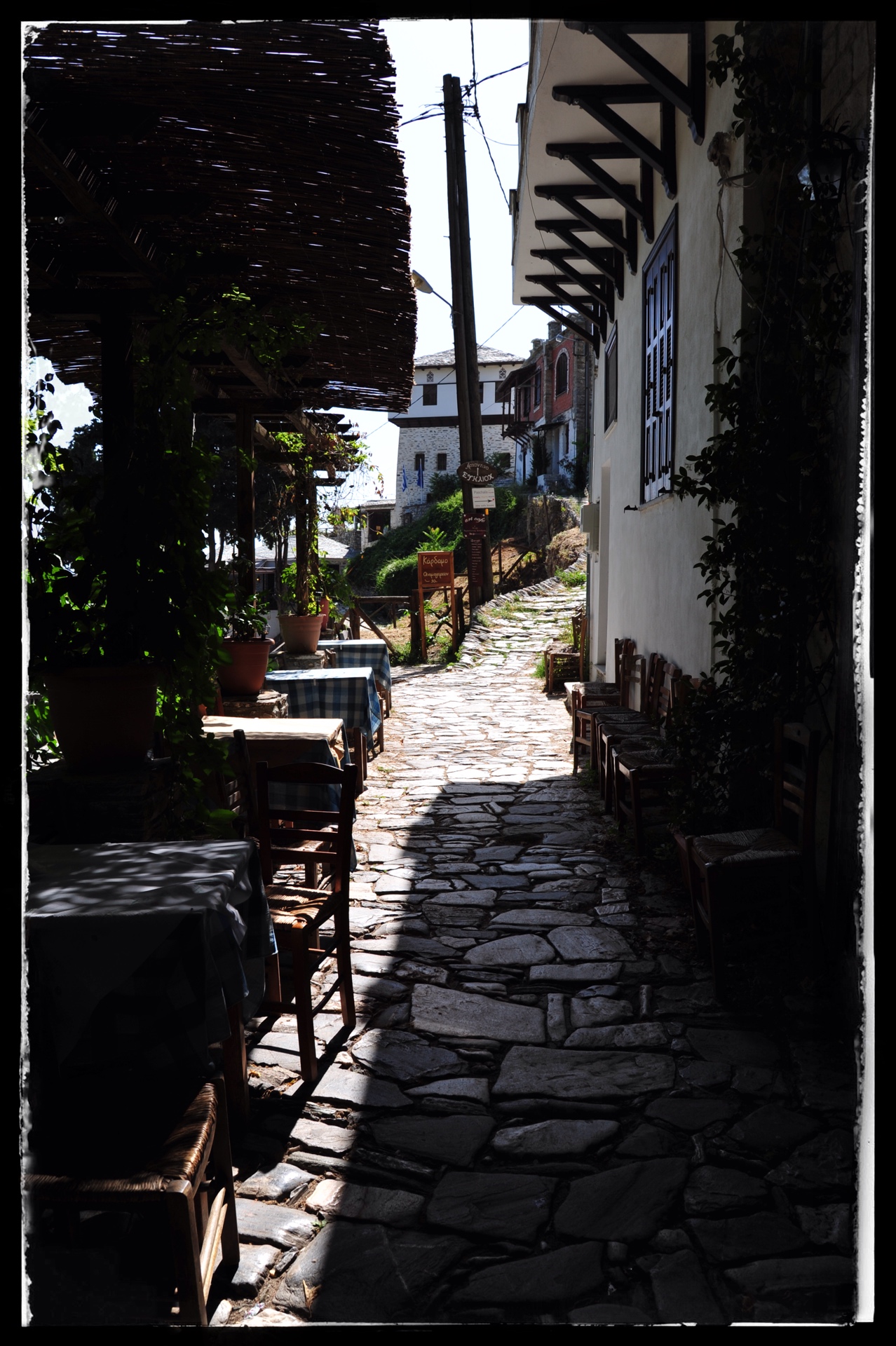 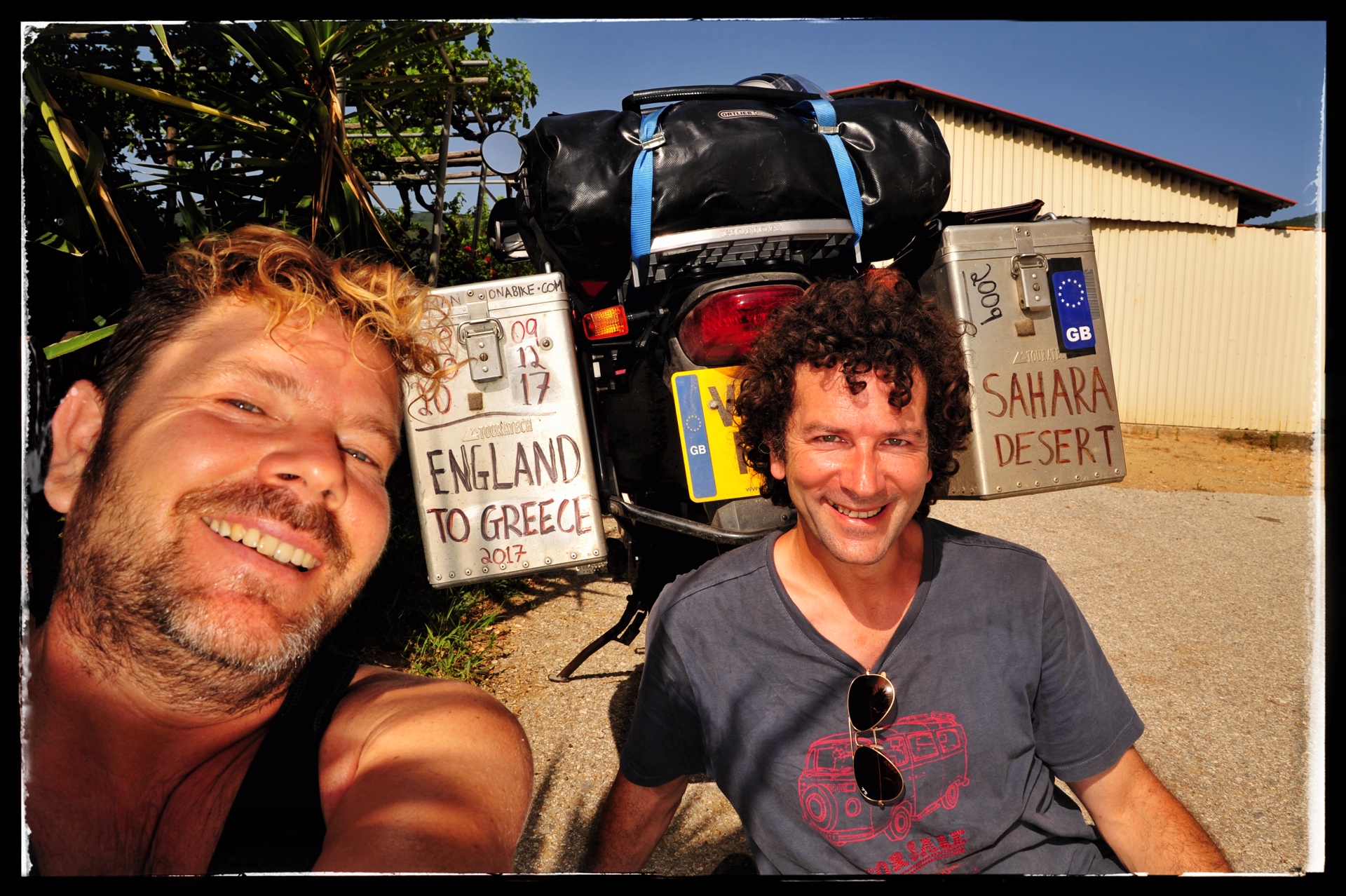 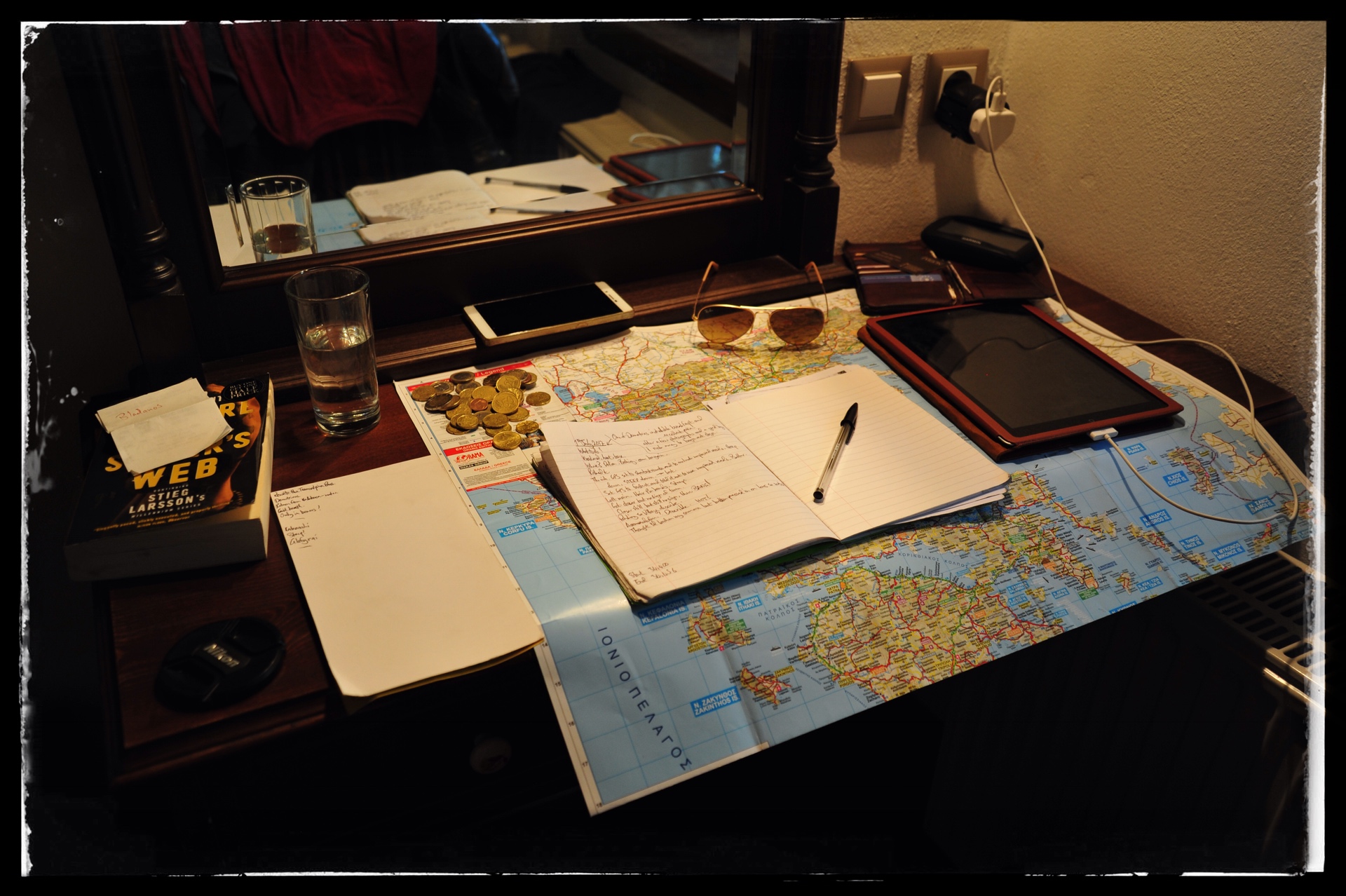